Diane Gedeon-Martin Invited to Speak at Senator Blumenthal’s (D-CT) Federal Grant Fair Diane Gedeon-Martin was the plenary speaker at the Federal Grant Fair hosted by Senator Richard Blumenthal on Friday, June 1, 2012, at  Chapman Hall on the campus of Middlesex Community College in Middletown, Connecticut.  Her session drew over 150 participants who absorbed everything they could about the federal grant process.

Ethics in Grant Seeking Discussed by The Write Source President Did you know it is unethical to pay grant consultants only if a grant is awarded or paying them a percentage of the grant award?  Diane Gedeon-Martin, President of The Write Source, discusses these two ethical misconceptions in the sidebar of the article Ethically Blindsided? in the March/April 2012 issue of Advancing Philanthropy published by the Association of Fundraising Professionals (AFP).

Two More Clients Win Kresge Challenge Grants The Write Source is now seven wins out of eight submissions for challenge grants from the Kresge Foundation for various building projects of our clients over the past 16 years.  In 2008, both Westminster College in Salt Lake City, Utah, and the YMCA of Greater Hartford in Connecticut received Kresge Challenge Grants.

Westminster College is the latest recipient of a $1.0 million Kresge Challenge Grant toward their $30.0 million Make It Happencapital campaign to support the creation of the Meldrum Science Center.  The College submitted the proposal we helped design in September with the Kresge Foundation announcing the award in December.

In June 2008, the Kresge Foundation notified the YMCA of Greater Hartford that the proposal we created for their new facility in North Hartford, as part of their $15.5 million Second Century of Service capital campaign, will receive an $850,000 challenge grant!  Previous clients winning Kresge Challenge Grants include the Blue Water YMCA in Port Huron, Michigan that received $800,000 in 2006 and Phelps Memorial Hospital in Sleepy Hollow, New York that received $800,000 in 2005.  Learn more about these projects by visiting our Grant Awards page.

Advice for Writing Grant Proposals in the Age of Social Media Article All Thumbs? In an article entitled All Thumbs? in the July/August 2010 issue of Advancing Philanthropy, Diane Gedeon-Martin, President of The Write Source talks about the effects of texting and social media are having on preparing grant proposals.

Seeking Grants Just as Tough in 2010 as It was in 2003! Ironically, the stock market drives the investment portfolios of foundations.  When the stock market is in flux, so are the number and size of grant awards.  The advice provided by Diane Gedeon-Martin in the article Grants: Funding Requests are Flooding In published by The NonProfit Times in November 2003 is as relevant today as it was seven years ago!

Online Grant Proposal Trends Featured in The Chronicle of Philanthropy Based on the success of the Writing Tight: Secrets to Preparing Successful Online Grant Proposals audioconference conducted by Diane Gedeon-Martin of The Write Source and hosted by the Association of Fundraising Professionals last fall, The Chronicle of Philanthropy decided to explore this emerging trend.  The author of the article Grant Seeking Goes Paperless interviewed Ms. Gedeon-Martin for her candid view on the process, both pro and con.

Audioconference on Writing Tight has the Largest Audience Ever! The audioconference entitled Writing Tight: Secrets to Preparing Successful Online Grant Proposals conducted by Diane Gedeon-Martin of The Write Source, on June 10, 2008, for the American Association of Grant Professionals (AAGP) and Charity University yielded the largest audience ever since beginning the program in 2004.  A total of 68 sites from across the country with anywhere from one to 20 participants listened to the audioconference and followed the presentation materials. You can listen to the audioconference and receive the materials for a fee by visiting either the AAGP or Charity University websites then following the links.  Or go to our Conference Schedule page to order the pre-recorded session.

Audioconference on Writing Tight has the Third Largest Audience! The AFP Audioconference conducted by Diane Gedeon-Martin of The Write Source, on September 6, 2007, entitled Writing Tight: Secrets to Preparing Successful Online Grant Proposals had the third-largest attendance in the six-year history of their audioconference series.  There were 127 sites that participated with an average of 20 persons per site totaling an audience of over 2,500!  Listeners from across the United States and Canada followed the materials provided by Ms. Gedeon-Martin to learn how to trim the fat out of their writing to accommodate the slim formats of today’s online grant applications.  Visit our Conference Schedule page to download or order the CD package that includes the PowerPoint presentation from AFP.

“Cutting to the Chase” Article Showcases The Write Source President In preparation for conducting the AFP Audioconference entitled Writing Tight: Secrets to Successful Online Proposals, Diane Gedeon-Martin provided her perspective of dealing with online applications.  Read the article Cutting to the Chase: Writing in the Online Age.

Learn to Make the Right Approach before Contacting a Grantmaker In the February 2006 issue of The Philanthropy Journal, she provided an overview of  What Grantmakers Want.  Ms. Gedeon-Martin cited three things nonprofits can do to strengthen their grant-seeking efforts.

Basic Grant  Seeking Methods Discussed by The Write Source President in 2003 Article In the July/August 2003 issue of Advancing Philanthropy published by the AFP, the author of the article Take Nothing for Granted interviewed Ms. Gedeon-Martin for her insights into the world of grant seeking.

Oct
27
Wed
10:00 am Introduction to Grants and Grant... @ Webinar
Introduction to Grants and Grant... @ Webinar
Oct 27 @ 10:00 am – 12:00 pm
Learn the basics of grants and grant writing to prepare successful proposals from the comfort of your office! Securing grants for your nonprofit organization requires a sound proposal. This workshop is for those who are[...]
Nov
9
Tue
10:00 am Advanced Grant Proposal Writing @ Webinar
Advanced Grant Proposal Writing @ Webinar
Nov 9 @ 10:00 am – 12:00 pm 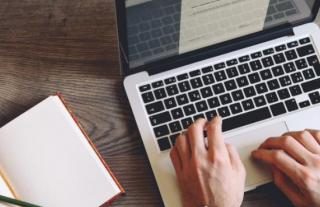 From developing the proposal idea to completing the details of the budget, this workshop provides an outline to use to prepare clear, concise, comprehensive, and competitive proposals. Participants will learn to develop measurable project goals,[...]
View Calendar